Mindoro was already known to the Chinese merchants who plied the seas to conduct commerce on the South China Sea route prior to the coming of the Spaniards in 1570s. Trading existed between the area and China, on the eastern part of the island.
The Spaniards encountered Moros in the island and had an ongoing war with them when the foreigners established their rule in Mindoro. The Spanish-Moro went on till the 19th century.
In 1896 during the Philippine Revolution, the island also took up their arms against Spanish rule and eventually seizing some settlements from them. When Gen Malvar from Batangas arrived with his 1,000 men armed with artillery, the Spaniards surrendered. On July 1, 1898, Mindoro was liberated under its colonizers.
Mindoro became a province in 1921 but the island of Lubang was annexed to it as early as 1902.
In 1950, the island was divided into two separate and autonomous province through Republic Act No. 505, designating the eastern portion of the island as Oriental Mindoro with Calapan now a city as capital, and western part as Occidental Mindoro with Mamburao as its capital.

Apo Reef, 34-km reef in Sablayan, Apo Island, is regarded as the second largest in the world and acclaimed as the best in Asia and as the diving mecca of the Philippines. The Apo Reef Marine Park includes the fascinating bird-populated islands of Binangaan and Cajos del Bajo, which are surrounded by waters with over 500 species of marine life and luxuriant coral growth represented by approximately 400 to 500 kaleidoscopic coral species.

Mt. Iglit in San Jose is a sanctuary for the tamaraw, a wild animal found nowhere else in the world, bearing resemblance to the carabao or Philippine buffalo.

Mamburao boasts of an elongated strip of beach with natural and rustic surroundings. 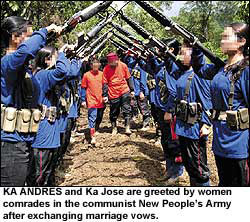 The first same-sex marriage in the Philippines was between two NPA members....